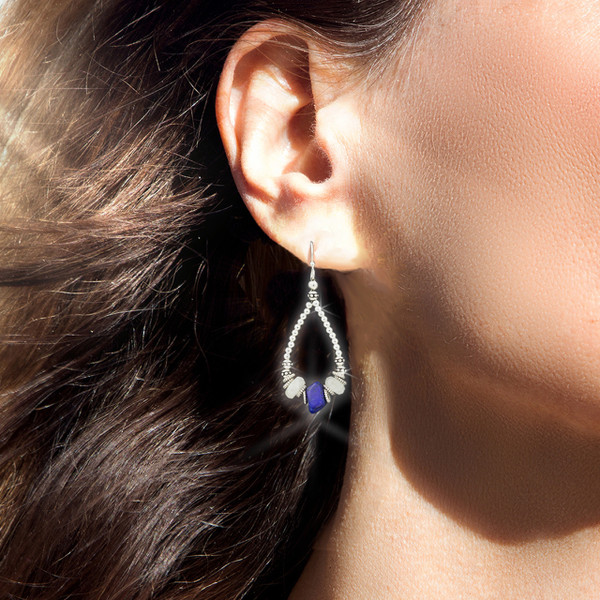 These Earrings Contain The Only Lapis "Seer's" Stones Guaranteed To Bring You Strong Intuitions Just From Touching Them*
Extremely rare and beautiful lapis stones once used by the Pharaohs — so powerful that with practice you can experience greatly expanded third eye visions every time you wear them.
Learn Below How This Is Possible & Where These Earrings Came From.
This is the bluest of blue lapis I have ever seen. When you touch it, you feel your third eye open and the visions begin to flow. ~ Energy Artist Julia
Made, energy channeled and blessed in our new age studios in the high mountains of Gypsum, CO USA. Lapis, moonstone and silver. Comes in a gift box with a descriptive card and instructions for activating its visionary energies.
This quality, high energy stone is not commonly found on the internet.
Sold with a 30 day money back guarantee and a 120 day exchange guarantee.

Click ADD TO CART to get yours today while we still have some left.

Dear Friends,
Before I met an Afghani man named Qaiser (meaning Ceasar or Emperor) I’d never seen lapis like this. He showed me amazing stones … the bluest of blue you can imagine, with gold flecks and intricate patterns.
Because they were so unusual, we tested them and discovered that they were in fact real, authentic, natural. You can’t be too careful.
I learned that Quaiser travels between his home country and Europe, bringing with him only the best stones to be used by Europe’s fine jewelers.
Hold them close and look into them, and they take your breath away. The effect they have on you is hard to describe. I look into them and see stars, galaxies and the depths of my own soul.
But my fascination with Quaiser’s stones was more than just their beauty. They have an astounding energy like no lapis I have ever experienced.
All you have to do is touch one, close your eyes and if you focus you feel like you have been transported to other worlds, receiving the visionary abilities of a seer, opening your third eye and allowing you to experience the spiritual world in a completely new way. *
They truly are powerful magic ... with just a touch enhancing your inner vision, clairvoyance, foresight, intuition and wisdom so you can make correct life decisions. They also allow you to see and break bad patterns that are limiting your abilities or the abilities of others.
Prophesy Stones Of The Pharaohs
I learned that these stones come from the same source as those acquired by the ancient Pharaohs and mystic priests of Egypt, allowing them to prophesize, divine, see the world of the gods, the afterlife as well as the future. They were even worn by Cleopatra.
Rare
So, I spent for what was for me a small fortune to get some, and then went through the time-consuming process of getting even more a year later. After quite a wait, the first package arrived. We all stood around in the studio and just marveled at them. In my mind's eye they seemed to beam out a mystical blue energy like you might see in the depths of a pyramid.
I first made some into a necklace which quickly sold out. Then, a year later I made them into a bracelet and earrings that I just released.
Designed To Enhance Visions & Insights
I asked spirit for guidance in placing the stones of varying shapes into the optimal configuration for opening the third eye ... to make the lapis work even better so it is true visionary seer’s jewelry.
Spirit this time told me to include moonstone which added added a layer of depth and mystical intuition of the moon.
Start Slow And Build Into Their Power
My one recommendation is that you not wear this every day to start. You need some time to get used to its strong energies. With time though, it will become an important part of you.
I wish you the best of luck with this, And if it isn’t too much trouble, please drop me a note and tell me what visions you see when you wear it, and especially how they helped you or others.
Namaste
Energy Artist Julia
_____________________
Financing Available
We do offer financing through paypal credit for those who need more time to pay. You can get it by choosing the credit option at checkout.
___________________________________
Last Chance
You have a risk free, guaranteed way to fill your heart with inspired insights and visions, and
You get to wear something beautiful and magical, so
Act now, before it is too late. I don't have a lot of these so get them while you can.
Click ADD TO CART above.
____________________________________

* These items are made for healing and protection of the spirit only.  They are not a substitute for medical, financial or professional advice of any kind or physical protection.  They do not cure the coronavirus or protect from infection. Our guarantee, if any would only cover the price paid directly to us for the item  -  which would be our only obligation under this guarantee. Any warranty does not cover damage from hitting gems on a hard surface.  All gems are inspected prior to shipment for damage. Notify us within 24 hours of receiving your stone if there is damage or we will assume it arrived safely.  In purchasing you agree to these terms.

Lapis Visionary Seer's Energy Necklace With Sunstone - The only one that guarantees visions.*