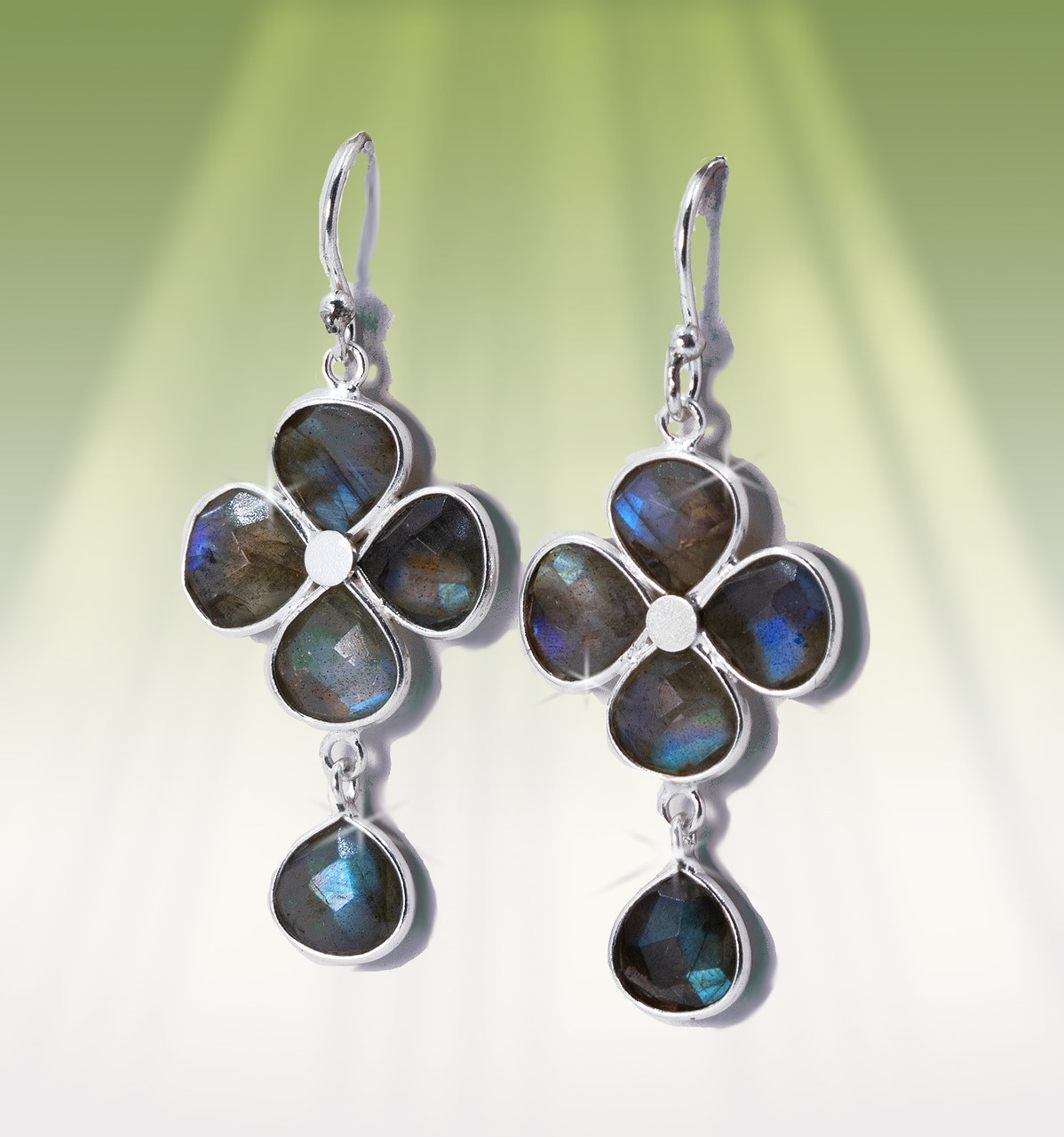 3 product reviews
$128.00 $78.00
"Wear these lucky four leaf clover energy earrings for a week and I guarantee your luck will change. " *
Ancient lore says that having this design on your person not only brings you good luck but also helps you see fairies.
Plus, these earrings have the shimming, fairy fire labradorite stone of communication, so you may even be able to talk to them.
Includes hypoallergenic silver ear wires. Earring size 1.75" x .75" inches. Solid and authenticated 925 silver. Also available in gold plated 925 silver. Guaranteed quality faceted labradorite. Hand made.
Click ADD TO CART to get yours today!
You immediately feel lucky when you put these on. - Energy Artist Julia

All items sold with a 30 day money back guarantee and a 120 day exchange guarantee!

*These earrings were photographed where they catch the light to show their "fire."  Depending on the angle of labradorite, you can see a lot of fire or no fire.  They change as your angle of view changes.

Dear Friends,
You’ve heard again and again that four leaf clovers bring you the luck of the fairies. That is a very old belief, steeped in lore that many have found to be true.
But do you know why they say that? With a little digging into the stories, I learned that having a four leaf clover on you, or its representation is believed to do more than just bring you luck. It is thought that you will be able to see fairies.
I’ve had strong dreams and visions of fairies in the past. They are part of my DNA. I paint them and feel their presence in my mind’s eye. So when I saw these labradorite four leaf clover earrings I was immediately attracted to them.
And while the four leaf clover drew me in, what really affected me was the beautiful labradorite within the design. I hadn’t seen that before. But it made sense. I don’t just want see the fairies. I want to talk to them. So having labradorite, the shimmering magical stone of communication, combined with a four leaf clover made sense.
I plan to wear them on St. Patricks day, which will be loads of fun. I also plan to wear them to bed and see if my dreams of fairies go from simply seeing to actually speaking. And if that works, we plan to visit a place known to have many fairies and see what happens.
If you want a pair, I have them in silver and gold. The stones are very nice and shimmer, putting out a fairy fire depending on the angle at which you view them. I will be saying a special prayer for them to enhance both your luck and your communication with fairies.
May the luck of the fairies be with you.
Namaste
EnergyArtist Julia
Click ADD TO CART to get yours today.
______________________
Energy Channeled And Blessed
Each piece is energy cleared and personally blessed by me to increase your luck and your fairy communication. A significant amount of energy has gone into it so it can reach out bring clear thought to your mind.
Limited Quantities - Lowest Price -- So Hurry
This is a quality piece which in a jewelry store would cost you two to three times more than what I am charging.
I also often sell out and don’t get more. I offer an item, then move onto the next thing where I feel the universe pull me. If you like this, please get it before I run out.
Consider getting one for you and one for someone you love who could use spiritual protection.
My Guarantee*
I guarantee that not only are these beautiful, but that they will bring you good luck and may even help you communicate with the fairies.*
If you don’t feel the change pretty quickly, return these within 30 days for a refund. I say this, all the while knowing that I will receive 0 back. I hardly ever do. My creations do what they say they will do.
What's The Hold Up?
You know you can benefit by having good luck, and
You get to wear something fun and beautiful, and
You get to try it at no risk to you for 30 days.
So click Add To Cart before this opportunity is gone.
________________________

*Note: These items DO NOT replace the need for medical treatment or counseling, financial advice or physical protection if you are your family are in a dangerous situation.  Always use common sense and seek professional advice for any major decisions.  Our obligation under this warranty and guaranty is limited only to the price paid directly to us for the item, and in purchasing you agree to release us from all other obligations.