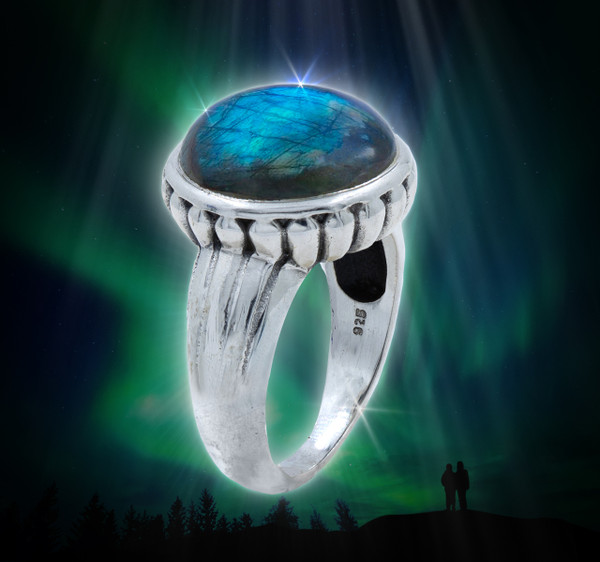 When The Ancient Inuit Found This Blue Fire Stone, They Discovered It Held All The Mystical, Magical Powers OF The Aurora Borealis (a/k/a Northern Lights).
New Northern Lights Ring Made With The Much Rarer "Blue Fire" Labradorite - Amplifies And Improves All Of Your Spiritual Abilities.

This quality is very hard to find at this price!

I guarantee that when you get this ring, and look at it often throughout the day, all the spiritual abilities you thought you might have will become gifts you know you do have and can use! If it doesn't work for you, return it within 30 days of purchase for a refund*

ABOUT: Guaranteed natural (never dyed) blue fire labradorite in authentic 925 silver. The fire (blue green shimmering tones) you see in the photo is of labradorite held at the correct angle. Color will vary depending on the angle.

Last week, our friends from India just couldn’t wait to show me the rare blue fire labradorite stones they had gotten from Canada and made into rings and earrings. They were excited because they knew I couldn’t resist getting them. Everyone knows I will always buy blue fire labradorite if I can get it. “Do you have any more?” I asked.
It was an exquisite Shetal design, where the mystical blue fire is held to the sky in a modern version of a traditional Nepalese setting. It projected the energies to the stars and back again. The design made the stone infinitely more powerful.
I bought every one they had. There unfortunately weren’t that many. I hope you can get one.
So you might ask, why I went crazy for them. The answer is in the stone’s history.
When the ancient Inuit of Labrador Canada discovered this stone, they believed they had found the dancing lights of the Aurora Borealis projecting its magic out to whoever touched it.
And they were right. It seemed to transform the spirit, with pure delight in its beauty and something more …. it gave whatever spiritual powers they already had a huge boost. It supercharged their abilities.
The Inuit walked out from that sacred spot and the shamanic use of labradorite was born.
And since then, this stone, especially those with the blue fire has been used by spiritualists and shamans to set all things right. It not only boosts their spiritual talents, but tempers inner doubts and negativities, bringing out the best in the wearer and all those around. It is transformative in that those who wear it become much better versions of themselves. It cleanses the aura and keeps you spiritually pure.
And of all the stones, the ones with blue fire are believed to be the most powerful.
Of course, many of the stones you see online will claim to have blue fire, but for the most part that is added with photoshop or even dyes. True blue fire is much harder to come by — at least the kind of blues found in the rings I have for you.
So yes, I’m really excited for you to have one of the rings. You will notice a difference from any other labradorite you have owned.
The opportunity to have a powerful stone like this doesn’t come that often. I expect them to sell right away like they have in the past. People who know labradorite will most likely gobble them up. So hurry.
I wish I had more to offer you. But there’s only about 10 or less per size. I hope you have a chance to get one. Considering getting a second one as a gift while it is still available.
Namaste
Energy Artist Julia
Guaranteed You Will Feel These Powers Helping You
I guarantee you are going to feel the mystical transformative powers of blue fire labradorite once you put this on. It will heighten whatever spiritual abilities you possess just like it has for shamans over many centuries.*
____________
What’s The Hold Up?
You know you can greatly benefit from the transformative powers of this stone, and
You get to wear something beautiful, and
You get to try it at no risk to you for 30 days.
Click add to cart to get yours.
These will soon sell out.
________________________________________
One Note:  The fire (blue green shimmering tones) you see in the photo is of labradorite held at the correct angle.
As you look at it from different angles it will go from no fire to intense fire depending on how you see it. It flashes at you.  If it doesn’t flash, it isn’t this quality labradorite.
________________________

* These items are made for healing of the spirit and spiritual protection only.  They are not a substitute for medical or professional advice, financial advice of any kind or physical protection.  Our guarantee only covers the price paid directly to us for the item  -  which is our only obligation under this guarantee.  In purchasing you agree to these terms.

Path To The Light, A Meeting With A Higher Power