The Tribal "Fairy Attractor" Necklace - We discovered on security cam that these stones attract fairies and bring you good luck.

(No reviews yet) Write a Review 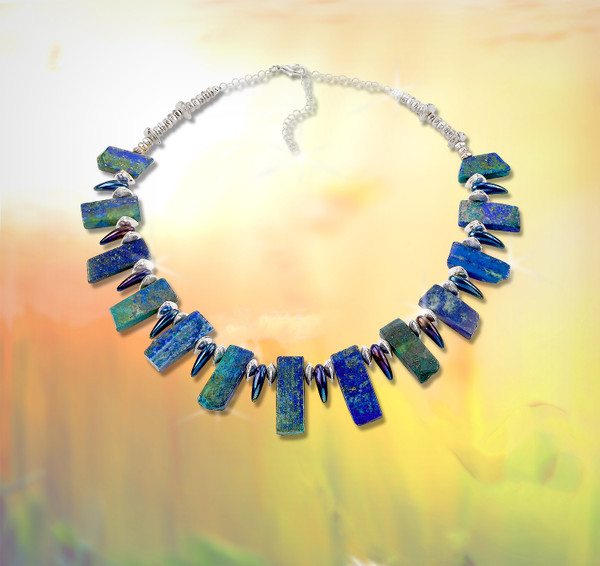 The Tribal "Fairy Attractor" Necklace - We discovered on security cam that these stones attract fairies and bring you good luck.

I discovered, quite by accident that this necklace attracts fairies.
Learn below how this happened and see a video of fairy/orbs in the area.
This Is A Once In A Lifetime Chance To Own A Powerful, Magical Necklace.
The only necklace guaranteed to attract fairies to your space.
Includes lapis slab "seer's" stones treated to bring out their green colors (in addition to blue),  blue crystal bear claw fairy beads, silver chain and silver plate beads. Energy blessed, chakra balanced, and magically infused.
Learn how it works below and see a link to the fairy video.
This is the necklace that on new moons attracts light orbs/fairies to an area of my studio. Since this started, I've had amazingly good luck. ~ Energy Artist Julia
Click ADD TO CART to get yours today!

All items sold with a 30 day money back guarantee and a 120 day exchange guarantee! Made in our new age studios in Gypsum, Colorado USA.

Dear Friends,
For many months this necklace sat on display in a part of my studio. And I began to notice that with every full moon and new moon, our motion-activated cameras would begin picking up light orbs in that area.
And while the orbs also appeared in other parts of my studio, they were most strongly focused around where this necklace sat. ( I’ve included links below to fairy videos taken.)
At some point, I began to look at the necklace differently, wondering what the connection was. And the impression I got was that it represented inclusion or connection to a certain fairy tribe.
And I came to understand that people who resonate with this piece, somehow have a fairy connection, in dreams, in other worlds, in past lives, and through the blessing of spirit.
Why It Attracts Fairies
I had created this totally by instinct, and spirit’s guiding hand, and I wondered why it was pulling in the fairies.
What I’ve come to believe is that the lapis slabs, treated to bring out both greens and blues, makes the fairies visible through its third eye seer’s powers.
Add to that the triangle beads, which often are depicted around an all-seeing eye (like on the dollar bill) and you have a much stronger seer’s piece that illuminates them when they are close.
The question is, why were they coming around in the first place?
I think in some way they wanted to be seen when they flew into the energetic field of the necklace. Their dance of light in the studio also seemed to be one of joy, like they were being released into the area from somewhere else. But more than that, the small blue crystals, shaped like bear’s claws have some effect.
When I first picked them up and saw how they sparkled and shined, I instinctively called them fairy crystals and realized that they were something wood fairies would like — especially those associated with the bear.
The bear is a strong, magical being of the forest with celestial connections to wisdom, strength, and healing. I think this group of fairies is attracted to this.
What Does It Do For You?
There are certain jewelry pieces that resonate so strongly with you that they almost define who you are and what you’re about. They exemplify your inner powers and bring them out so you can use them in your everyday life.
This is one of those pieces. It defines you as a magically gifted and connected being of light. In your spirit, you float and heal, spread magic, and wonder wherever you go.
And, with the help of the fairies, you receive good luck throughout your life.
So if you feel in your heart, that this is what you were meant to be, then you probably should be wearing this necklace, especially on full moons and during the new moon.
Guaranteed To Attract Fairies
I have no doubt, that on new moons, and sometimes fun moons, that this necklace will attract the fairies to wherever you place it.
And I see no sense in offering something like this, without guaranteeing results. So I guarantee that it will do what I say it will do. If it doesn’t you can return it within 30 days for a refund.*
But considering you may now see them, how will you know?
The answer is that most likely you will put it on and resonate with its powers so strongly that you will have no doubt whatsoever about its abilities.
In addition, you will feel more magic around you and notice strange and delightful coincidences, although you may find them grabbing things you like and moving them around so you have to look for them.
You can also set up a camera like I did, although I believe they are only seen that way when they want to be seen.
But disturbing fairies too much can cause them to go elsewhere. Many people leave out small offerings of milk and honey, or even wine and whiskey, to ensure that they are not offended. It would be good to place those things near your necklace on a new moon.
Special Blessing
I will be asking for a blessing of your necklace, to provide you the magic you need to live a charmed life. This is the same sort of blessing I do when I perform mass healings.
Limited Quantities - Hurry If You Want One
It took me quite some time to pull together this necklace and there is no real guarantee I can get more of the stones for this.
I suggest you get it if you feel the connection because this opportunity can pass and never again cross your path.
I look forward to hearing your experiences after you get this.
Namaste,
Energy Artist Julia
_______________________________
What's The Hold-Up?
You have a risk free, guaranteed way to surround yourself with these magical energies,
And you get to try it risk-free, so
Act now, before it is too late,
Click here and get yours now.
_______________________
To see the video from my studio where fairy orbs appeared visit: https://vimeo.com/517225104
To see another video where fairies were attracted to my work,
visit: https://www.youtube.com/watch?v=WDf0ahbaLYs
Financing Now Available. This is priced far below what you would pay in a jewelry store, but it is still more than many of my other items. Getting the right stones with these kinds of energies required I pay a premium. So through paypal I am offering 0% interest for 6 months on anything you purchase. Just check credit at checkout if you need extra time.

*Note: These items DO NOT replace the need for medical treatment or counseling, financial advice or physical protection if you are your family are in a dangerous situation. Our obligation under this warranty and guaranty is limited only to the price paid directly to us for the item, and in purchasing you agree to release us from all other obligations.