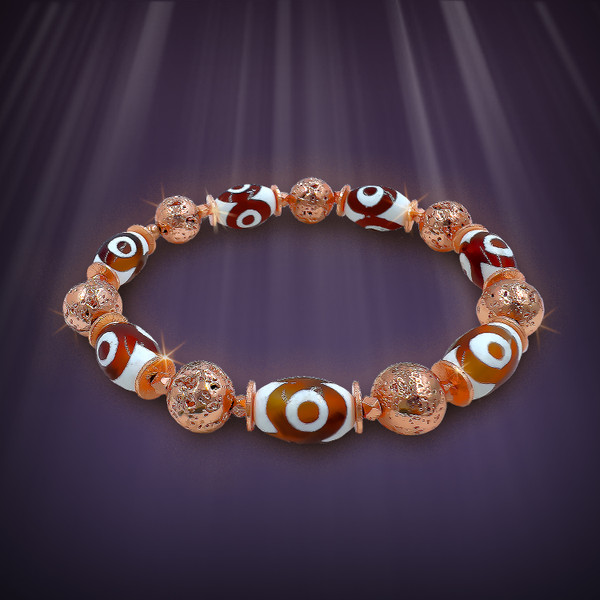 The Only Bracelet That Blocks Negative Energies On Two Different Levels - It is Twice As Strong!
Combines the negative energy deflecting powers of the protective eye talisman with the positive activating, love energies of carnelian. It neutralize negativity at its source. Copper added to heighten its powers.
Helps you rise above negativity, insults and personal verbal attacks as if they came from a child. They just don’t get to you.
Guaranteed to block negative energy attacks too.*

This blocks negative energies that can bring you bad luck! ~ Energy Artist Julia

Sold with a 30-day money-back guarantee and a 120-day exchange guarantee.

Dear Friends,
They say you should beam back love, and positive energies to counter negative energies coming your way. This can be spiritual attacks, curses, negative entities or just negative feelings directed your way by others.
But when you are being attacked, even if it is just someone saying nasty things about you at work or to your circle of friends, it is so hard to counter them with only love. You want to fight back.
It is our deepest instinct to meet attacks with reciprocal negativity and aggression. But for the most part it doesn’t work and only infects the world with more negativity.
I recently watched a newscast of two people standing nose to nose and screaming at one another while at a protest. I realized that both were beaming negativity while neither was changing their opinion in the least. Projecting love and understanding would have at the very least changed the energy of the situation.
Most energy exchanges are not that intense, and there are far worse things out there that can hurt you than a malicious or jealous coworker.
Sometimes there are negative things that have targeted you - malice directed your way that you have no way of understanding or knowing. You just feel it and see the effects in the form of bad luck in your life or just a blah feeling. (See the 8 signs you are under spiritual attack in the photos for this bracelet.)  Please keep in mind that you should always also see a doctor if you are experiencing any of these signs because they could be medical.
To combat this sort of negative energy attack, the eye talisman began to appear about 2,600 years ago, mostly to protect against other people but also to protect from malevolent spiritual sources.
It is a tried and true, magical protection symbol. To this day it is worn extensively and has even appeared on some celebrities of late. After all, Hollywood can be an exceptionally vicious place.
What I’ve done is add something to my eye of protection talisman so it can work on two levels, not just one.
Why My Protection Bracelet Works Much Better
The eye of protection really only works by deflecting negative energies directed your way. It also indicates to any would-be attackers that you are spiritually protected.
What I’ve done is have the protective eye symbol etched on the positive energy stone carnelian. So not only does the bracelet deflect negativity, but it counters it at the source with positive energies of love, happiness and understanding.
It seeks out the exact energetic place where the negativity is originating and neutralizes. It works on two levels and is at least twice better
How You Feel Wearing It. How It Helps You Rise above Negativity
When you wear it, you feel more secure, to the point of not being affected by negative thoughts, feelings, energies and words directed your way. You no longer feel the compulsion to react. If anything, you feel pity for the person attacking you.
This completely disarms your detractors. When you don’t react, and it is obvious to them you are completely unaffected by their ire, these spiritual and intellectual bullies realize they are up against something far more powerful than them, and they stop.
After all, it isn’t pulling protection out of thin air. It is pulling the positive energies from spirit and beaming them out though the protective eye. It is just so much more powerful than anything thrown your way.
You deal with things more from the perspective of an evolved person who a child is trying to insult. Others who witness this begin to look upon that person in the same manner — seeing them as an immature, jealous or mean individual.
And not only does it work on people, but hidden, malevolent energies see you as something to avoid because they basically whither in the face of the positive energies you send back.
What is so good about this bracelet is that you aren’t with great difficulty forcing yourself to send back positivity while actually hurting inside. You are so above it that it doesn’t affect you and you are not afraid of it.
*I should say regarding this that you should always take precautions and secure help if you are being physically threatened. This is for spiritual protection only.
Should You Wear Two?
One customer pointed out that your non-dominant hand protects energies inward, while your dominant hand projects energies like love outwards, so maybe you should wear one on each hand.
I don’t think this is necessary because for me it works well on either hand and I switch hands often. But I guess if I felt I was under serious spiritual attack, I would wear two - one on each hand. Otherwise, I prefer my left hand.
Live Your Life And Love Your Life
Life is just too short to let negativity bring you down.  I hope you will let this make things better.
Namaste,
Energy Artist Julia
Click ADD TO CART and get yours before they run out.
______________________

*Note: These items DO NOT replace the need for medical treatment or counseling, financial advice or physical protection if you are your family are in a dangerous situation. Our obligation under any warranty or  guaranty, if any is made is limited only to the price paid directly to us for the item, and in purchasing you agree to release us from all other obligations.