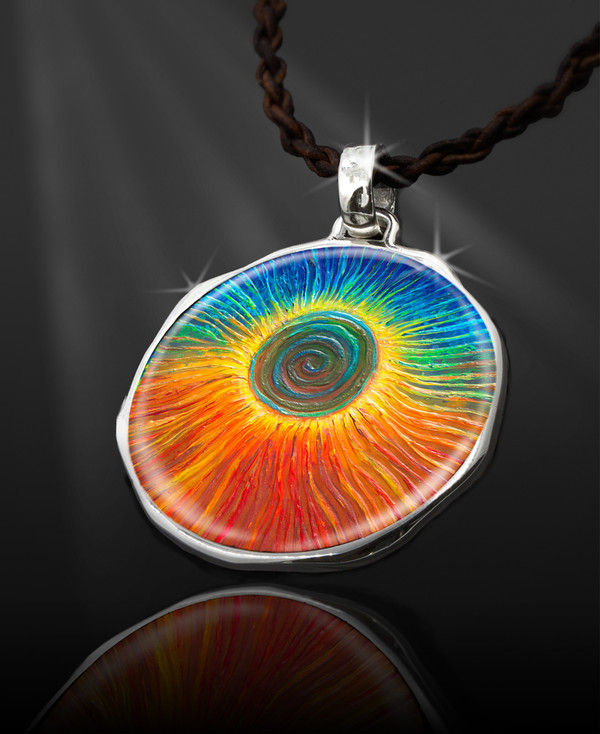 It emits the powerful energies of the eclipse, the event that made spiritual growth and transformation much more fluid, powerful and effective.  And while the eclipse has ended, its energies continue to transmit through this talisman.

Everything you attempt spiritually works so much better when you have this close by.

Click ADD TO CART to get yours today!
Made With. Bohemian style hammered metal finish -  platinum plating over jewelry grade stainless with high quality braided leather chain.  Hand made in our new age studios in Gypsum Colorado. Chakra balanced, energy enhanced/channeled and personally blessed by the artist.
This is a very high grade piece made with fired resinated glass and ground prisms which magnify the artwork and its energies. Size 2.25" x 1.75" inches.
This is part of Julia's "New Bohemian" collection representing your enlightened spiritual life style -- for the young at heart. Its irregular styling brings forth ancestral tribal energies from a time when we lived closer to nature and mother earth.
FREEE LEATHER CHAIN INCLUDED:  This is a great price.  During this introduction we are adding in the leather chain FREE which alone is worth $25.

Dear Friends,
I cannot say I was completely stuck, but spiritually speaking, over several months I definitely was blocked. I wasn’t moving forward at the speed I had in the past until I experienced the eclipse and from it made this energy painting. Up until then I was doing a lot and only advancing a little.
You may have had the same experience. Where once leaps in insights, understanding and visions seemed to happen almost daily, progress became more muddled. Your spiritual gifts may also have become less powerful.
It happens to all of us.  And worse yet, sometimes from these blockages we slip back into old habits and patterns that we thought we had shed long ago.
The eclipse gave all of us a short but powerful window to reignite our spiritual growth and enhance our abilities in ways many thought were not possible.
But unfortunately the eclipse was very brief and many didn't even see it!
I wanted something that would last far longer and make the ability to accelerate spiritual growth more permanent while enhancing whatever psychic or other abilities I have. So, with spirit's help I channeled the energies of the eclipse into this image.
Under the direction of spirit I placed into this image the opposite energies of:
The changes just focusing on this image made possible were amazing! Learn how below.
Why This Eclipse Image Helps Accelerate Your Spiritual Growth & Abilities
By joining these opposite energies as one, their lines of delineation become blurred. So insights that may have eluded you for years can more easily occur, a new way of thinking can take place, a new path can be realized. In addition, psychic and other gifts are greatly improved because you have at your fingertips twice the energies. This is only possible through the combination of these powers in the eclipse.
Adding The Sacred Spiral Enhanced Its Energies
But when I saw the eclipse, spirit also showed me a giant spiral in the moon. I didn’t know what that meant at first and painted it instinctually.
I later learned that in ancient and modern times, this sacred symbol is used by Native Americans to effectuate spiritual growth and expanding consciousness on your travels through life. The seed of an idea, thought or feeling is planted in the center and emerges in a circular pattern to become ever stronger.
By combining all the contradictory energies into one, and then allowing it to emerge through a spiral pattern of ever increasing spiritual consciousness, I created something for you to follow with your eyes and heart .. to expand your awareness and let cosmic consciousness flow to you.
Just focus on the center now, then let your eyes move along the lines until you reach the power of the eclipse. And don’t worry about confusion that an eclipse normally can bring. I have balanced the image with earth and sky so you are grounded while also connecting with the heavens.
It really does provide all you need to reset or jump start you on your spiritual path and make small abilities very powerful.
GUARANTEED YOUR SPIRITUAL TRANSFORMATION WILL BE ACCELERATED
I know this will help you grow spiritually by leaps and bounds so I have no problem guaranteeing it.
Just get a print or jewelry piece, and focus on it for two weeks. If after that you do not believe it has helped you, return it within 30 days for a refund.*
_________________

*Note: These items DO NOT replace the need for medical treatment or counseling, financial advice or physical protection if you are your family are in a dangerous situation. Our obligation under this warranty and guaranty is limited only to the price paid directly to us for the item, and in purchasing you agree to release us from all other obligations.