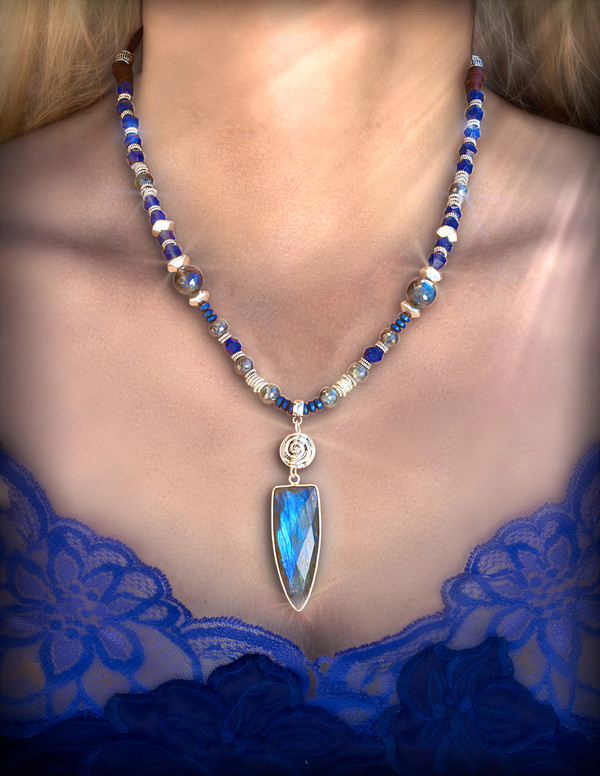 When The Ancient Inuit Discovered This Shimmering Stone, They Found It Held All The Mystical, Magical Powers Of The Northern Lights (Aurora Borealis.) And now you can have it too.
This Beautiful Energy Artist Julia Creation Was Made With Rare Blue Fire Labradorite That Greatly Amplifies All Of Your Spiritual Abilities.
Includes spiral bead representing your life's journey, and a labradorite arrowhead set in solid 925 silver which points you down your true life path, labradorite beads and bluest of blue lapis for second sight.
This is the kind of unique and beautiful piece you will love wearing you your entire life. ~ Energy Artist Julia
Only 30 Available So Hurry!
Adjustable 14" to 40" inches.  Main pendant is 1.5" inches inches long. Surprisingly light.
Click ADD TO CART to get yours today!

All items sold with a 30 day money back guarantee and a 120 day exchange guarantee! Stones are photographed in direct sunlight to show their colors. All labradorite "flashes" its color at certain angles or in certain light.  It is a prismatic stone in that the blue you see will come when viewed from certain positions.

Click ADD TO CART and get one before they are all sold.

Dear Friends,
This past spring, one of my my gem dealers just couldn’t wait to show me the labradorite stones they had gotten from Canada and made into this shimmering arrowhead pendant. They were excited because they knew I couldn’t resist getting them. Everyone knows I will always buy labradorite with "internal fire" if I can get it. “Do you have any more?” I asked.
I bought every one they had which was only 30. There were more, but they didn't have the stunning blue fire my customers love, so I didn't get them. I hope you can get one of those select number I did get.
I placed it into this beautiful necklace so it could project your energies to the stars and back again. The necklace design made the stone infinitely more powerful. In addition to labradorite set in an arrowhead pendant, I also added lapis to increase your second sight, and blue titanium beads which promote internal harmony and peace.
So you might ask, why I went crazy for this labradorite. The answer is in the stone’s history.
When the ancient Inuit of Labrador Canada discovered this stone, they believed they had found the dancing lights of the Aurora Borealis projecting its magic out to whoever touched it.
And they were right. It seemed to transform the spirit, with pure delight in its beauty and something more …. it gave whatever spiritual powers someone already had a huge boost. It supercharged their abilities.
The Inuit walked out from that sacred spot and the shamanic use of labradorite was born. What is so interesting about this labradorite arrowhead design is that the Inuit who in legend discovered it was a hunter who surely carried arrowheads with him. He broke open the stone to let some of the aurora's lights back into our world.
So the arrowhead represents the release of spiritual magic to the world, and also the direction we must take in our lives.
Since the discovery of labradorite, this stone, especially those with the internal blue fire, has been used by spiritualists and shamans to set all things right.
It not only boosts their spiritual talents, but tempers inner doubts and negativities, bringing out the best in the wearer and all those around. It is transformative in that those who wear it become much better versions of themselves. It cleanses the aura and keeps you spiritually pure.
Of course, many of the stones you see online will claim to have the blue aurora fire, but for the most part that is added with photoshop or even dyes.
So yes, I’m really excited for you to have this necklace. You will notice a difference from any other labradorite you have owned.
The opportunity to have a powerful necklace like this doesn’t come that often. I expect them to sell right away like they have in the past. People who know labradorite will most likely gobble them up. So hurry.
I wish I had more to offer you. I hope you have a chance to get one. Considering getting a second one as a gift while it is still available.
Namaste
Energy Artist Julia
___________________________
Guaranteed You Will Feel These Powers Helping You
I guarantee you are going to feel the mystical transformative powers of this labradorite once you put these on. It will heighten whatever spiritual abilities you possess just like it has for shamans over many centuries.*
If it doesn’t work for you, return it within 30 days for a refund.
Gift Box And Descriptive Card Included
These come in a nice gift box for you or in case you want to give them as a gift. They also include a card describing the spiritual properties of the piece as well as a special blessing/prayer you can use to activate its powers.
Waiting Will Cost You Because The Price Goes Up
You may have noticed I often offer the biggest discounts for the first 10 or so items sold. Then, as we get near to sellout the price goes up, eventually reaching full retail for the last ones sold. The best deals are always when you buy right away, so please don’t wait.
Last Chance
You know you can greatly benefit from the spiritual power boosting abilities of this stone, and
You get to wear something beautiful and magical, so
Act now, before it is too late. I don't have a lot of these so get them while you can.
Click ADD TO CART before these are all gone.
________________________

*Note: These items DO NOT replace the need for medical treatment or counseling, financial advice or physical protection if you are your family are in a dangerous situation.  It does not cure the carona virus.  While it is believed to attract the energies of love, it cannot change the will of others and love only comes if spirit has made it a part of your path. Our obligation under this warranty and guaranty is limited only to the price paid directly to us for the item, and in purchasing you agree to release us from all other obligations.

The "Spiritual Detoxifier" Bracelet - Rare cut fluorite and green chalcedony clears whatever space you enter of negative energies. It even clears your other jewelry.